When Jesus was baptised, the Spirit descended and the Father announced to the world how very proud he was of his Son: “You are my Son, whom I love; with you I am well pleased” (Luke 3:22). At this point in his life, however, Jesus hadn’t actually done anything publicly to merit such approval. Jesus was thirty years old at a time when people rarely lived beyond forty-five. He hadn’t yet begun his ministry, and yet the Father was pleased with him. God’s pleasure in us is never dependent upon our achievements. He doesn’t grade our performance like a wannabe celebrity in a reality show. He loves us because he likes us because we are his kids.

There are just two other occasions on which the Gospels report the actual words of the Father speaking audibly to Jesus, and since it has only been recorded three times in the totality of world history, all three moments surely deserve our particular attention.

This first instance occurred at Jesus’ baptism in the River Jordan at the start of his ministry.

The second occurred during his transfiguration on a mountain in the middle of his ministry (Luke 9:35).

The third occurred in the temple at the end of his ministry during Jesus’ final week (John 12:28).

The weird thing is that, on all three occasions—in the river at the start, up the mountain in the middle, and at the temple at the end—the Father says pretty much the same thing. At Jesus’ transfiguration the Father says, “This is my Son, whom I love; with him I am well pleased” (Matthew 17:5). Almost identical to his words at Jesus’ baptism. And the third time he simply affirms Jesus, assuring him that his life has already brought glory.

The Father could have said so much, and yet he said so little.

These three exchanges which punctuate the three years of Jesus’ ministry must surely rank as some of the most important verses in the whole of Scripture, and yet they say so little. The Father could have denounced the Romans, rebuked his Son’s detractors, told people to repent, or revealed the meaning of life. This, after all, is God speaking audibly to his Son for all to hear. But instead, on each occasion, all he says is “I love you” twice and “I’m proud of you” three times. And it seems to me that, in the absence of any other evidence, these three exchanges alone tell us all we need to know about the unconditional affection and affirmation within the heart of the Trinity, and consequently the relentless love of the Father towards all of us as his children: God’s priority is relationship, and his default is kindness.

The Father’s Oscar speech, his one phone call, the words he wants to write in the sky on your birthday, are these: “I love you. I’m proud of you.”

Of course, this can be frustrating. Most of us would prefer God to speak in specifics: to tell us what to do, when to do it, and how. But he generally refuses to micromanage our lives. When I say, “Where should I go?” he says, “I love you.” I ask, “What should I do?” and he says, “I’m proud of you.” I say, “How should I handle this situation?” and he says, “Let’s hang out.” Time and time again God ignores my most pressing questions in order to answer the deepest longing of my heart.

A prayer room is a place for intimate interaction with the Father.

A prayer room may sometimes become a sort of classroom in which we learn from God, or it may occasionally become a boardroom for doing business with him, or a war room in which we fight for the extension of his kingdom. But first and foremost a prayer room is not a classroom, a boardroom or a war room; it’s a living room for intimate interaction with the Father. Carol Arnott, who with her husband, John, has spent more than twenty years helping Christians to wait and to “soak” in God’s presence at their church in Toronto, puts it like this:

There must be time for him, just to love him and have him love us, no other agendas, no list of prayer requests. These may come later, but we need to put loving him first, because only as we are filled with his love do we have love to give away. So many Christians cannot rest in his presence but must constantly be on duty. I do not want to hear the words “depart from me I never knew you.” I want the love affair to grow.2

“One Thing I ask from the LORD,” says the psalmist

Our Father in heaven longs for us to seek out his presence in the Holy of Holies without an agenda. Not out of duty. Not because we have favours to ask or things to get off our chests. He wants us to seek him out simply because we are happier in his presence than anywhere else.

One thing I ask from the LORD,

this only do I seek:

that I may dwell in the house of the Lord

all the days of my life,

to gaze on the beauty of the Lord

and to seek him in his temple.

Dive deeper in prayer by reading Dirty Glory: Go Where Your Best Prayers Take You by Pete Greig, founder of the 24-7 Prayer Movement. Editor’s note: The British spelling and grammar in this article reflect the author’s heritage. 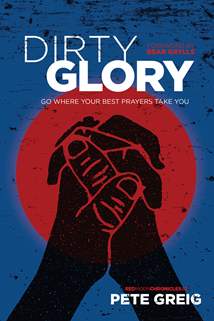