If The Navigators are anything, we are respecters of history. One of the reasons for this respect is surely the long tenure of so many of our leaders. Notable among them is Jerry Bridges, whose tenure with the organization before his death earlier this year was sixty years. Sixty years! Nearly forty of those years with The Navigators included him being an informal ambassador for the organization as the author of a steady stream of books, beginning with The Pursuit of Holiness in 1978 and ending, sadly, this year with The Blessing of Humility, which I had the honor and pleasure of editing. Jerry’s books are known and loved worldwide; nearly 4 million copies of his various books have been sold over the years, and they’ve been translated into a variety of languages. In the publishing world, he is a treasure, a bona fide legend.

One quiet day he walked into my office, introduced himself, and told me, “My latest book is done.” Like it’s a totally normal thing to write a book.

In fairness, Jerry had been discussing this book with our publisher, so the prospect of a new book by a living legend was not off my radar. But the matter-of-factness of my first encounter with Jerry was striking to me.

If you’ve ever known a living legend—small or large, local or global—you can perhaps imagine why this encounter was so striking. Most living legends enjoy their stature: They expect adulation, they anticipate deference. The more insecure among them demand such things. With Jerry there was no pomp, no circumstance, no expectation of gesticulation, no sense of entitlement whatsoever. Just “My latest book is done.” Thank you very much. “It’s on humility in action.” Of course it is.

What was it, I wonder, about Jerry that allowed him to take his success in stride that constrained him from lording his prominence over people like me?

Maybe it was his modest upbringing, which he detailed in his brief memoir God Took Me by the Hand. He describes his childhood home as “very plain,” even speculating that it had once been “servants’ quarters for the larger house on the other side of the block.” Maybe this consciousness that he was being raised in a home meant for servants settled into his spirit and informed the posture he would take in all his relations going forward. Maybe his mind returned to this very plain place whenever he turned in the Scriptures to Matthew’s Gospel: “Whoever would be great among you must be your servant” (20:26), or “It is enough for the disciple to be like his teacher, and the servant like his master” (10:25), who “came not to be served but to serve” (20:28).

Maybe it was the four physical defects he was born with: his crossed eyes, his deafness in one ear, his deformed spine and breastbone. “I did not get off to a good start physically,” he wrote with his typical lack of ego. Maybe these imperfections came to mind whenever he turned to the Holiness Code in Leviticus, where deformities tended to disqualify people from full participation in the life of faith; maybe he would quickly turn back to the New Testament to see Jesus bring healing to broken body after broken body, to hear him call these broken bodies “Son” and “Daughter,” to wrestle with Paul’s command to “honor God with your body,” to relish in the promise of a day to come when the pain of a broken body will be no more.

Maybe—probably most likely—it was the advice Jerry gave all of us, the advice he surely gave himself: “Preach the gospel to yourself every day.” A lifetime of confronting himself with the sin nature that tainted his very existence, only to immediately then soak in the good news that his Savior had borne that sin on his own broken body at the cross, surely would have cut the flow of oxygen to his ego, even as it fed his spirit with the joy of the Lord. When you so regularly taste and see that God is good, does an ego even make sense anymore?

Whatever the contributing factors, the Jerry Bridges I met that unassuming day in my office, the living legend I found myself confronted with, came in quietly and, in the language of my industry, submitted his manuscript. We leapt into action of course, adding his book to the next available slot in our release schedule, brainstorming a title, searching the manuscript for areas of improvement. It was remarkably clean—the kind of clean you only get from a well-practiced author with no ego.

Jerry Bridges entered my life roughly one year before he moved on to eternity. We didn’t know one another long enough for him to shift in my imagination from legend to friend. But in our short acquaintance he earned his legendary status. In his book, he suggests that as we try to picture what humility looks like, we will find the Beatitudes of Jesus’ Sermon on the Mount to be an excellent portrait. I’m inclined to agree with him. But I’d add that, if you don’t happen to have a Bible handy, you need look no further than Jerry himself. Humility in action, indeed.

This article was written by David Zimmerman, Senior Acquisitions Editor at NavPress. 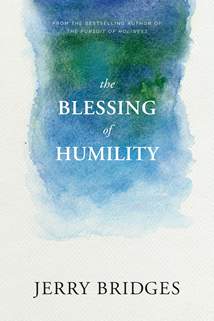 The Blessing of Humility
by Jerry Bridges
$14.99
Price May Vary by Retailer
E-book
Softcover
Details