The Story of The Message

The Story of The Message

After more than 2 decades and millions of excited readers, The Message® continues to be the most widely read contemporary equivalence translation of the Bible. The following article is adapted from an interview with Eugene Peterson.

I couldn’t have created The Message without a deep understanding of Hebrew and Greek, nor could I have done it without a congregation who didn’t know the Bible. Many knew it superficially, and others were just tired of hearing it. So, I needed to wake them up.

Many members came out of Baltimore to be free of crime, segregation, and riots. They were buying guns and double locking their doors. One guy even had a big wrench in his car to fend off anyone who tried to get in with him.

“This is awful,” I thought. “You’re Presbyterians! Don’t you know anything about the grace and security of God? . . . I have to start over. I’ve been preaching to these people for 12 years and they’re just not getting it.”

So I started with Galatians. I was angry, and Galatians is Paul’s angriest letter. I planned to have a Bible study on Sunday mornings the first year and preach a series of sermons on it the year after.

There were 14-15 people in the Bible study at first, and I tried to communicate Galatians the way Paul wrote it with the same emphasis and use of metaphors. But after two or three Sundays, I came home and told my wife Jan, “They’re not getting it. They just sit there with blank stares and stir their coffee. I’m going to teach them Greek. If they read it in Greek they’ll get it.” And she said, “Yeah, that’ll empty the place out pretty fast.”

“Well okay then,” I thought. “I won’t teach them Greek. I’ll teach them to think Greek.” So I started translating. I copied a page at a time and shared it with the group. We discussed the content and made editorial changes together. Eventually, I published it in a book called Traveling Light.

A little while later, John Stein, an editor at NavPress, called and asked if I would consider translating the whole New Testament. I said, “I can’t do the whole New Testament! It took me a whole year to do Galatians. And besides, I don’t think I could do the gospels. There’s such a kind of a purity and clearness and limpid openness.”

John convinced me to try the first ten chapters of Matthew before I gave him my final answer. I began, and it was just as bad as I thought it would be. I was still a professor translating the Bible, feeling as if I couldn’t take any chances because I was doing this for a publisher.

When I reached the end of chapter 4, I was ready to give up. It all felt like a lost cause. But then, I noticed the Beatitudes and decided to do whatever I felt like doing. I did the whole thing in 10 minutes. I brought the passage to Jan, and started reading, and this was the beginning of The Message. I’d found my voice, my pastoral voice.

Who is The Message for?

• Those who want to connect with God but don’t know where to begin. The Message invites you to read, know, experience God through the Bible much like the very first readers.

• Long-time Bible readers tired of routine Bible-reading. Re-engage with God’s Word when your reading has grown dry, stale, or flat, or when you feel tired and discouraged.

• Those looking for a gift Bible for nonbelievers. Help them experience firsthand God’s Word in language that is understandable, surprising, and real.

• Christian parents and youth workers who want to help their teens experience the freshness and relevance of God and His Word. Take the “boring” out of teen Bible reading.

• Someone who wants to get the big picture and authentic feel of a passage, a book, or the whole Bible. The Message is first and foremost a reading Bible in contemporary language. Experience the tender familiarity of the epistles, the heartfelt pleadings and sharp warnings of the prophets, and the real stories of real people in the historical accounts.

• Christian leaders and pastors who need a great resource for their ministry, teaching, and outreach. Shaped by the heart of a pastor who began his life’s vocation as a seminary professor of Greek and Hebrew, The Message captures the everyday language and direct expressiveness that marked the original texts. Eugene Peterson’s goal in bringing the original texts into today’s language was to help people listen—really listen—to the message of each book. 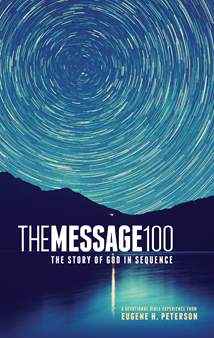 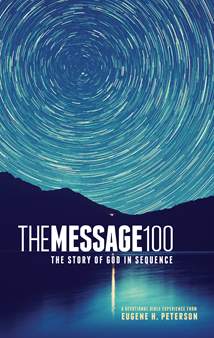