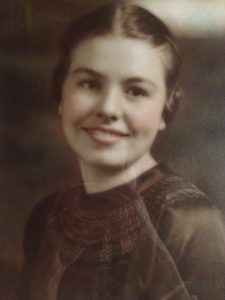 Every day, in one way or another, Mother taught her three sons that “God’s word,” the Holy Story, is the way that guides us, the truth that saves us, and the love that fills us.
My mother’s Bible was an appendage of her body. A walking concordance, she seemed to know it like a surgeon knows a scalpel. She had a page in her Bible where she made entries of the dates when she finished reading through the Bible. She read through the New Testament two or three times as often as she read through the Old Testament. At least twice a year she read through the Old Testament; at least four times a year through the New Testament. For her these were not “books,” but friends. These writers of the Bible were her conversation partners, her brothers and sisters in the cloud. When she finished one reading of James, she wrote this in her notebook: “James, I have enjoyed you. Some day we shall enjoy Jesus together.”
Though she got enormously excited in the late 1970s over the news of Bob Dylan’s conversion to Christianity, she never did understand his response when asked to nominate the most overrated and underrated books of the twentieth century: “Overrated and underrated: The Bible.” How could you ever overrate the Bible? The Bible is what enabled her as a child to deal with the fear of a black panther chasing her and her sister while her parents and brothers were away, what helped her to deal with the death of two siblings (Hallie and Margaret) and the burning of her house to the ground in the same year. “I couldn’t live without my Bible,” she would testify, while brandishing it like a firearm.
The Best Bible Translation
In Mother’s mind, the Bible was not flat. What it says in Leviticus is not of equal importance to what it says in John. That does not mean some parts are more important than others; all passages of Scripture are of equal value—but not of equal relevance. Some portions of Scripture applied to a culture that no longer existed.
Similarly, there was a huge difference between “truth” and “facts.” We grew up hearing about the Scottish preacher (never named) who said, “Everything in the Bible is true, except for the facts.” That’s a pun and wordplay, of course, but for Mother I took it to mean that while there are facts in the Bible, it was not written as a book of facts. Cultures and contexts often determine what should or should not be considered “fact.” The Bible was written not as a book of relative facts but absolute truths, divine truth communicated in stories, poetry, songs, prophecies, letters, histories, wisdom sayings, and apocalyptic literature.
The best translation of the Bible? NIV? NRSV? KJV? No, the best translation is the life that puts the story into daily practice, turning the Bible into the living Bible. If that is true, then my Mother’s Bible was the best translation I’ve ever read. She read her Bible in the Holy Spirit language.

Some people know more about the Scriptures than they do about the Christ. – Mabel Boggs Sweet

Mother never tried to figure out the Bible. She tried to figure out life from the vista of the Bible. Rather than try to reshape people’s vision of the Bible and go from there, she started with a biblical vision. When I talked to her about Scripture and Creation as the “two Bibles” that reveal the divine to us, she reminded me that the star (nature) and the signs (culture) did not guide the magi all the way to Christ. They needed the Scriptures to go the rest of the way. To see Jesus, we need the Scriptures.
A feeling is not a fact. You can “feel” something without that “feeling” being based on any factual reality. A ditty attributed to Martin Luther is how we learned from Mother to “get it straight.”

Feelings come and feelings go
And feelings are deceiving
Our warrant is the Word of God
None else is worth believing.
I’ll trust in God’s unchanging Word
Till soul and body sever
For though all things shall pass away
HIS WORD SHALL STAND FOREVER!
(She never attributed this herself to Luther, only to “someone says.”) 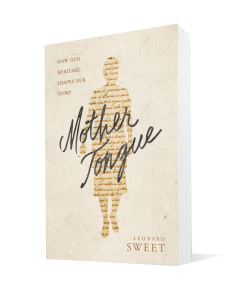 Dive deeper into the life of this remarkable woman by reading Mother Tongue: How Our Heritage Shapes Our Story (NavPress 2017) by Leonard Sweet.

Latest Articles:
3 Types of Fatigue and How to Fight Against It
It’s Time to Reclaim the Sacredness of Our Work
How to Change the World Where You Live