My friend Ellie Lofarro is a “Why not?” kind of girl. She’s always up for an adventure. She recently went on a mission trip to Costa Rica. Afterward I had to smile when she wrote:
The mission trip to Costa Rica was like all mission trips: amazing. As always, we go to give and we actually get far more than any time, talent, or treasure we think we are bringing to the least of these. It was certainly life changing for the others and me.
And I went on my first zip line! It was over the Rain Forest. If the cable broke, they would never have found my body. I thought I would zip along a very long, very high in the sky cable—and I did. What I did not realize is that there were seventeen more tree platforms and cables to follow. No turning back. No turning back. I felt muscle aches the next day in muscles that have never spoken up or been seen or heard from before.

Life is too long to keep doing things we need to stop, and too short to miss the things we want to begin.

Those words came tumbling out of a walk-talk session with my friends Patsy Clairmont and Anita Renfroe as we rambled down the main street of Franklin, Tennessee. The joy the three of us have when we get together needs to be bottled and sold. You probably have friends like that. If not, now is as good a time as any to find some. They don’t just happen. You have to be intentional to make and keep good friends! 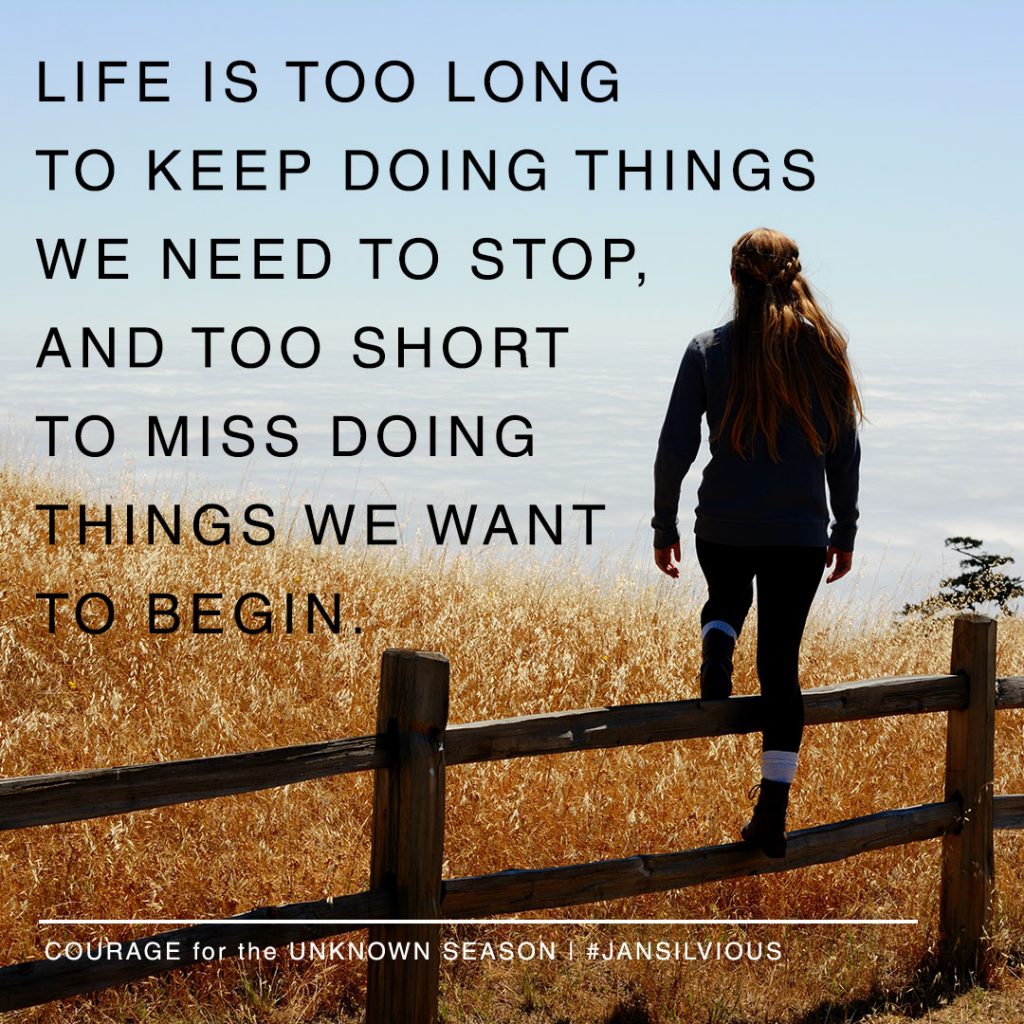 Due to travel and heavy schedules, the three of us try to make time to meet two or three times a year. Patsy and I are both in our seventies and Anita is still in her fifties, but we find endless things to discuss and discover. That’s what friendship should be as we age. The people we hang out with should be those who can share the journey. That’s what Anita, Patsy, and I do for one another. We challenge, affirm, and encourage the hopes and creativity within each other. That’s how new thoughts and greater confidences bubble up. It was these two who said, “Go for it!” when I said I wanted to write this book on the unknown seasons.
You’re reading with Jan Silvious, author of Courage for the Unknown Season: Navigating Whats Next with Confidence and Hope
No matter what unknown season we may find ourselves in, it is imperative to keep a strong sense of adventure alive. Life is to be lived, and the unknown seasons, whether exciting or hard, should never keep us from looking for the life that is around us. There is always something to do or to explore. Too many times, we let the unknown season limit us.
The thought that our time is too long to keep doing things we need to stop, and too short to miss doing things we want to begin, has rolled around in my head more than once since Patsy, Anita, and I walked and talked that summer day in Franklin. The stark awareness that time no longer stretches endlessly ahead of me has kept me from taking on projects that could take a lifetime. I could dream up a myriad of things I’d like to still have time to do, like adopting needy kids or buying a horse farm or walking across America, but life is too short for such things, so I confine my desires to lesser projects. 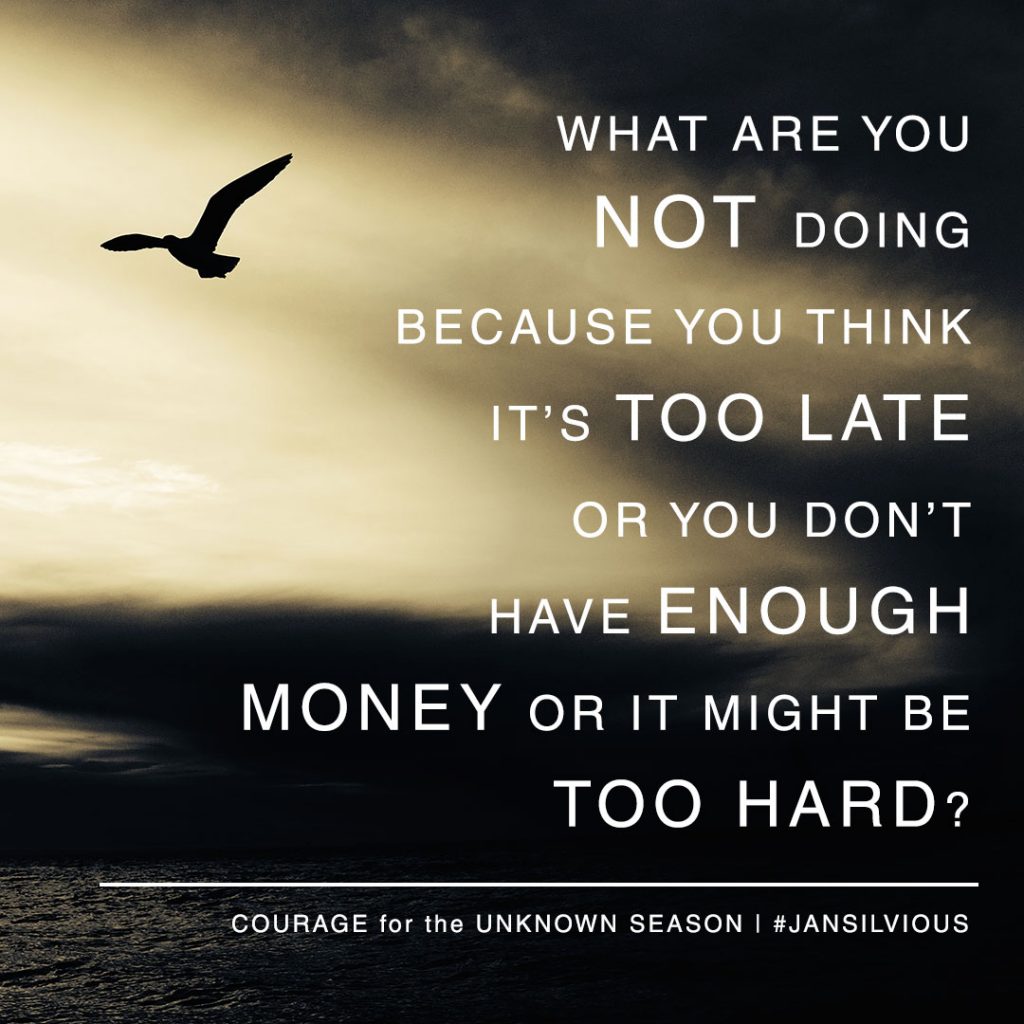 As my seventieth birthday (and Christmas) was approaching, I convinced my husband that I really wanted a dog. He wasn’t as keen on the idea as I was, but he relented and I began my search. I have inner rules about only adopting dogs that need homes, so I began looking for a rescue. I went to the pet section on Craigslist. After looking and reading and going back over and over again, I saw a picture of a young black-and-white pit-bull mix. The caption over his soulful-eyed pose was “The perfect dog for Christmas.” He was described as exceptionally smart, playful, and housetrained. The more I looked at his picture, the more I knew he was mine. Again, don’t ask me why, because in my head I wanted a female who was older and easygoing—but for this dog I prayed, and when I saw his picture, well, you know, that was it.
I emailed the rescue organization that had him and assumed that one willing inquiry would allow me to pick him up in a day or two. I was so wrong. I found out I had to fill out a twenty-seven-question questionnaire and have a home visit to be approved as an adoptive dog-mother. I also found out this boy had a checkered past. He was from a town two hundred miles away, had been picked up twice for running the road with an older dog, and had been scheduled to be euthanized. No third chance for him, he was doomed. But wait! A woman from my hometown happened to walk into the kill shelter that was holding him and saw my guy playing with a little kitten. Her heart was touched by his gentleness to the point that she called a friend in Chattanooga (where I live) to see if she would help her foster this dog. The friend agreed, and six weeks later, after he had been neutered, immunized, and checked out by the vet, he was on Craigslist. I had no idea about his past or that he had been rescued in the nick of time. All I knew was, for this dog I prayed. The rest is history. 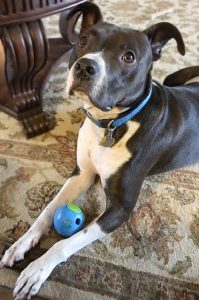 I’ve often laughed at myself and this dog. When we first became a team, he reminded me of the character Ouiser and her overgrown dog in the movie Steel Magnolias. If you’ve seen it, you know that huge dog pulled her all over the little town where the story was staged. My boy, Rocky-Buddy, pulled me everywhere we went for a while. I’d secretly wonder if I had done the right thing and where on earth he was going to pull me next. But then I’d remember: For this dog I prayed!
My seventy-first year has been so much fun and so much more active than it would have been had I not gone ahead and gotten this rambunctious, loving, smart, sweet boy dog. I would not have wanted to miss the joy of having him in my life, although I couldn’t have told you what that joy would be. I just knew I wanted a dog, and I didn’t want to miss this experience because I didn’t think it was the right season.
Every season has its challenges. That’s just a fact. As we move from one unknown season to another we’re going to encounter the question, “Why not?” And the question that is really being asked is, “Why not really live?” There will be different ways of living, depending on energy, resources, and responsibility. But no matter the season, asking “Why not?” can be a great self-prompter to make the most of whatever comes, even in the unknown season.


These can all be blocks to really living. Sometimes you can overcome your self-objections with a little daring-do! Look for short-term adventures if you fear time being too short. Look for free excursions if money is in short supply. Go ahead and meet the challenge, even it seems really hard.
Why? Because as Patsy says, “Life is too long to keep doing things we need to stop, and too short to miss the things we want to begin.”
Want more courage for your unknown seasons? Read Courage for the Unknown Season: Navigating What’s Next with Confidence and Hope.
Jan Silvious is a long-time speaker, professional life coach, wife, mother, and grandmother. She is author of eleven books, including Big Girls Don’t Whine and Fool-Proofing Your Life. Jan and her husband, Charlie, live in Tennessee, and have three grown sons, two daughters-in-love, five charming grandchildren and a very bright rescued pit-bull, Rocky-Buddy. Learn more at jansilvious.com.


Latest Articles:
Who Should I Invest My Disciplemaking Efforts in?
The Problem of Evil in Batman v. Superman
Four Words that Help Move Me from Grief to Acceptance