As we prepare to honor our fathers on the third Sunday in June, I would like to share an unforgettable story about my father, Ernie Goble. This story is seldom told because it is almost too much to tell. It isn’t funny or flippant, but it is one unforgettable leadership lesson. I was young when this happened and didn’t fully understand it at the time, but I’ve never stopped thinking about it.
My dad was a tolerant, gentle man who had little use for laziness or naysayers, and he lived his life by the motto Acta Non Verba, action not talk. Deeds not words. That was my father’s motto . . . and if those elements of his personality got him in hot water at times, they were also his greatest strengths.
It’s 1969 or 1970, and we’re driving a country highway, somewhere near my older brother Geoff’s house in New Mexico. We’ve picked up Geoff and his wife Nancy, and now the five of us—Geoff, Nancy, Mom, Dad, and me—are headed somewhere that I’ve long since forgotten. The road is winding along the side of a mountain, with a drop of a few hundred feet on one side and a steep cliff on the other. We pass occasional stray rocks that have fallen and clutter the side of the road.
We round a sharp corner, and there’s a car dangling over the edge of the roadway, just like a movie. The front wheels are over the edge, and it looks like the car could go over at any moment. Three seconds later, we skid to a stop behind the car, and Dad jumps out. Geoff jumps out. 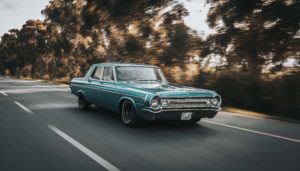 Mom spins toward the backseat, arm out. “Don’t you get out, Roy! You stay right—”
I jump out anyway. I see Dad at the driver’s door. I see Geoff lugging a large rock and wedging it behind one of the woman’s rear tires. I copy my brother, sprinting for a nearby rock and carrying it back to the car. I hear the woman driver through her open window, sobbing, sobbing, and I can see Dad’s lips moving. His hands are out, palms down, like he’s trying to calm her.
Mom and Nancy are at the side of the road now, waving their arms. I know they’re flagging down someone willing to race to the closest pay phone to call for help.
Geoff and I add another two rocks, and another two. We wedge them in as tight as we can because every few seconds the car lurches, like the driver has her foot on the brake and the accelerator at the same time.
The tires are as secure as we’re going to make them, and we stop to breathe. I glance at Geoff as the woman revs the engine again. We both know: She’s trying to kill herself.
I sidle slightly closer to Dad, despite the terror in my chest. I hear him talking. Calm and low, but firm, like I’ve heard him talk to a horse before. He’s telling the woman everything he’s about to do, step by step, and when I hear it my chest gets even tighter.
His actions match every word. The next few seconds feel like years as we watch. He touches the door, takes the handle, opens the door, gently talking all the while. He puts one hand on the steering wheel and then—don’t Dad, don’t—he eases in so his right hip is on the seat and his right leg is inside the car. He’s not asking the woman, he’s telling. He presses down on the brake pedal with his right foot, he uses his left foot to set the emergency brake, he reaches over with his right hand and shifts the transmission into park.
The woman’s head is in her hands and she’s sobbing louder than ever and then she just . . . goes limp. She gives up.
Dad turns off the ignition and takes out the keys, and then his body relaxes too. He’s not saying anything now. He’s just sitting close to the woman, close enough for her to slump against him, sobbing, terrified, confused.
I shudder. I walk to my mother, and she puts her arm around me. No one speaks. A few minutes go by, and a car passes. A bird calls high above. A few more minutes pass. Dad hasn’t moved and neither has the woman.
Sirens approach. Dad glances over as the police car stops on the shoulder. He turns back to the woman, smiles at her, and steps away from the car. He’s holding the keys.
The officer steps to the driver’s door. “License and registration, please.”
Dad is getting ready to hand the keys over, but when he hears the officer, his arm freezes. He fixes the officer with a stare that makes him take a half step back. It’s the stare of a man who grew up poor, who hustled pickles and chocolate cake out of parties so he could eat, who saw death and destruction as he fought for his country in a world war, who pulled greasy parts of wrecked cars so he could support his family, who stared down drug addicts and Hells Angels alike. It was a stare that conveyed disgust, anger, and fearlessness. It was also a stare of desperation, of a man who had just risked his life for a stranger without thinking twice. Then Dad shakes his head, hands over the keys, and strides back to our car.
We get back in our car. I face the front and see Dad’s hands shaking a bit on the wheel. Mom is crying silently. My brother and sister-in-law are sitting still beside me, breathing deep. 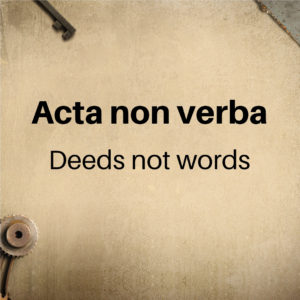 We pull away. I look back and see the police officer talking to the woman, see the rocks we wedged under her rear wheels. See everything growing smaller.
And then we turn the corner.
***
To this day, I can taste that fear. I can hear the woman’s engine revving, hear the tires lurching against the dirt and the rocks.
And to this day, I believe that event was a beautiful summation of what defined my father. Caring, loving, compassionate, and desperate to see life continue, even in the midst of self-hatred. Especially in the midst of self-hatred.
The only way he could do that was to act.
No planning. No deliberation. He simply sprang from the car and figured things out as he went along. I believe that’s why the policeman’s manner infuriated my father. Having acted without regard for his own safety, Dad became disgusted by the insistence on procedural routine. The officer missed the main point: There was a desperate woman who needed help.
That was the only point my father had seen.
Dad was a special man. I knew that as a kid. I know it even better now that he is gone.

After a story like that, well, where can we go from here? Scripture is filled with stories we could use. But after consulting with my publisher, the decision has been made not to include the entire book of James.
We’ve also decided not to include Isaiah 1:16-17 (or hundreds of other verses from that book).
Or the Sermon on the Mount. Or Matthew 25:34-46.
Or Hosea 6.
Or Amos 5:21-24.
In fact, now that I’ve wasted all this time with preamble, I only have space for three more sentences.
Read everything I just mentioned. But if you can’t find the time for that, here’s the condensed version.
I will show you my faith by my deeds.
James 2:18

Lesson from the Junkyard

“I will show you my faith by my deeds” (James 2:18).
You have just read an excerpt from Salvaged: Leadership Lessons Pulled from the Junkyard by Roy Goble. 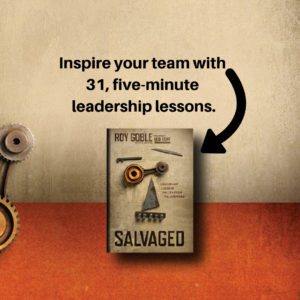