This story is from the NavPress book, Just. You. Wait. by Tricia Lott Williford. It’s an intimate passage about the start of her husband, Peter’s experience in jail several years prior to their marriage. According to Peter, one of the highlights of his experience in jail was the book cart.

Please consider purchasing Just. You. Wait. on NavPress.com Code: CLIGOGO during the week of July 1-7, 2019. For each book purchased, a prison will receive a copy for their inmate library. We are grateful for our partnership with Christian Library International to provide this book to prisons across the U. S.

As Peter and I sat in the rocking chairs on the deck of his family’s mountain home, I asked him to tell me more about the morning after his first night in jail. He had been released to go home, but he wasn’t exactly set free.

I was that guy

He said, “I don’t know how to describe the shame. It’s so thick. I wanted to avert my eyes from any human. I didn’t want to look anyone in the eye, but I had to face them. I felt untouchable and pathetic, and I was so embarrassed by how I had dishonored my family. Aside from that deep shame, I had the inconvenience of losing my license for at least a year, and as for riding your bike everywhere in the middle of winter? Let’s just say this: People who ride their bikes in a snowstorm are probably not environmentalists. They’re likely people who got a DUI and aren’t allowed to drive. I was that guy.
“But I’m an actor. I put on a facade to show everyone that this didn’t bother me. Sure, I screwed up a little bit, and yes, there was alcohol involved, but that doesn’t mean I’m an alcoholic. I may have some alcoholic tendencies, but calling me ‘an alcoholic’ is a little drastic and judgy. My sisters asked me to go to an AA meeting, and I said sure, I’d go. I wanted to appease them, and it wouldn’t hurt to look good for the upcoming arraignment I had with a judge. I would take the classes and the courses, so when I went to sentencing this judge would see that I was serious about living a better life. I was highly motivated to make myself look good.”
When he went to those first meetings, he wanted to hide in the back. As the new guy, he didn’t realize that all the people in the room were in the same boat with him, on their own journey of submission. They were there because they knew they had a problem. He was there to hide from his.
He went to as many meetings as he could, and he had a sponsor sign off on all of them, all to make him look good. He built an elaborate house of cards. He’d prove himself to be compliant, a good guy who just had a few too many drinks. He’d present his case and say, “This was hardly a pattern, your honor. Look at this exemplary behavior. Surely I am a man who is above the punishment of the law.”
What Peter failed to recall was this fact: This DUI was his third. And the courts had recently passed a law saying that a third DUI meant mandatory jail time. It had been twenty-five years since his last DUI, but the system doesn’t care how long it has been. It could be three in one week or three over the course of a lifetime. Three is three.

Waiting in measures of kairos and chronos

I’ve learned that there are two Greek words for time: kairos and chronos. They are subtly but importantly different. Kairos refers to a season or opportunity, and chronos refers to the actual passing of time.[i] God often presents us with opportunities to make the right decision, a chance to choose the better path. If we miss the exit signs and persist on a path of destruction, despite his gentle guidance, God is prone to shifting strategies to get our attention. This is when he uses time, days upon days and weeks upon weeks. When we ignore the season to obey, he uses the actual passage of time as a tool to change our hearts. Somehow, deep within us, there begins to grow a longing to obey.
Peter could delay the sentencing as long as possible, and he could attend as many meetings as he deemed fit to pull off this charade. He could offer additional urinalysis and he could volunteer for court-ordered classes before the court even ordered them. But it hardly mattered. He had an appointment with a judge, and there was a jail cell with Peter’s name on it.

There’s more to this story—and much more to learn about waiting well in any situation. Pick up a copy of Just. You. Wait.: Patience, Contentment, and Hope for the Everyday by Tricia Lott Williford. 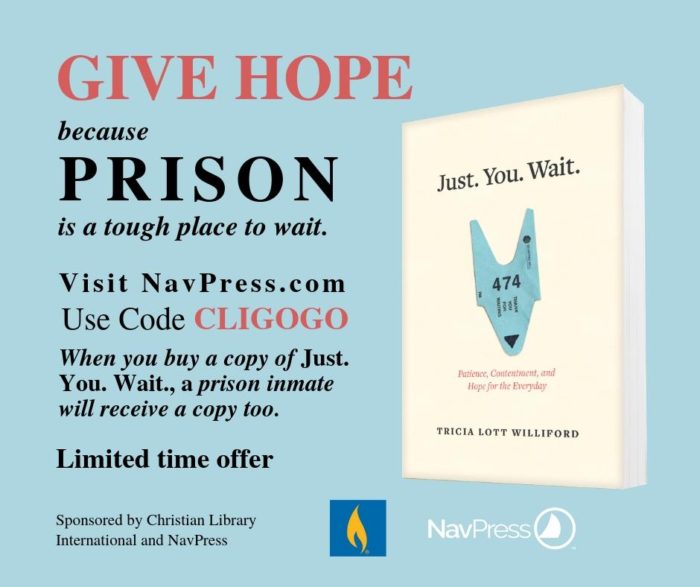 Latest Articles:
The Church’s Call to Embody and Extend a Kingdom Politic
8 Tips for Starting a Disciplemaking Relationship
How Do I Know Who to Invest My Disciplemaking Efforts in?