by Cynthia Fantasia, author of In the Lingering Light: Courage and Hope for the Alzheimer’s Caregiver
This is part two of a three-part series on Alzheimer’s caregiving. Here, I share thirteen lessons learned (and am still learning) as I cared for and walked alongside my husband through his journey with Alzheimer’s Disease. May these truths strengthen you for your ongoing journey. Because one thing I have come to realize: God doesn’t waste anything. Lessons will come at the end of the journey. So let’s move on to a few more lessons.
In my first article, I shared these five lessons:

Here are four more lessons to help you or someone you care about walk through a season of caregiving.

When Bob’s condition worsened and his care intensified, the hospital staff had lists of questions for me. As sad as this season was, I felt incredibly well prepared to respond to their questions about Bob’s palliative care. My preparation was not based on my medical wisdom; rather, I was speaking Bob’s words and wishes. Over the years, sometimes during those long walks, we had discussed our thoughts and wishes about end-of-life matters. We were not sick or old; we were just talking. Our thoughts flowed freely because the time was so far away and, as far as we were concerned, that time might not come. But talk we did. Sometimes we would joke about what we wanted. But we never joked about what we didn’t want.
The time did come—much sooner than I would have liked. But when the doctors began by saying, “This is a really difficult question,” it really wasn’t. I am so deeply grateful that Bob and I talked freely and often; it made the difficult questions a bit easier. Not less sad, but easier. My encouragement to all is to have those conversations while you are young, while you are healthy. The time will come, and the questions will be asked. Will you be prepared?

Like all married couples, Bob and I argued. I knew that the Bible says we are not to let the sun go down on our anger (Ephesians 4:26). I used to joke with Bob, saying, “Well, the sun is shining somewhere in the world!”
One day, many years ago, Bob and I visited some very dear friends while we were vacationing in Florida. This couple had their share of challenges—the brilliant husband had a serious medical incident causing him to spend twenty years like a little child, being lovingly cared for by his wife. We loved spending time with them, loved seeing her strong character and his sweet nature. One day, while three of us were engaged in a very deep conversation, Mark kept interrupting. His wife, Karen, lovingly looked at him and said, “Not now, Mark.” He replied, “Okay, sweet Karen.”
That simple interchange marked our lives from that day on. On the way home, Bob suggested that one of us, during an argument, should respond, “Okay, sweet Bob,” or “Okay, sweet Cynthia.” And we did for a long time.
When Alzheimer’s robbed Bob of the ability to reason and remember, it also gave him the ability to keep short accounts, precisely because he couldn’t reason or remember. If he didn’t remember what he said, or why I was upset, what good did it do for me to remember?
“Bear with each other and forgive one another if any of you has a grievance against someone. Forgive as the Lord forgave you” (Colossians 3:13). A freeing lesson learned in the furnace of Alzheimer’s disease.

Keep Your Eyes on the Road

I had to keep focused. The only social circle I could maintain was of people who made time for us, for me. There were friends (some I hardly knew) who would just stop by the house and thereby help me believe that we hadn’t been forgotten.
One friend, Rebecca, would pull into the driveway, ring the doorbell, and hand me two cups of coffee from our local coffee shop. She’d give me a hug and then go on her way to a meeting or a class. She’s a busy lady, but she took time to let me know she remembered us. I will be forever grateful.
There were those who acknowledged that our situation was hard and often awful and extended grace, not instruction. And then there were those who passed judgment, telling me that I wasn’t handling things the way I should. They had better ideas. Well, they didn’t live in my world, and I just couldn’t deal with it—I had to maintain focus, keep my eyes on the road. For those fractured relationships, I grieve, but I do not carry guilt.
“Whether you turn to the right or to the left, your ears will hear a voice behind you, saying, ‘This is the way; walk in it’” (Isaiah 30:21). A lesson learned through loss, on many levels.

Many years ago, I learned of a study that had determined that we open and close our hands about twenty-five million times in our lives. So, I did the math and had it checked by Bob, my engineer husband: If the average life span is seventy years (at least, that is what the Bible tells us!—see Psalm 90:10) and there are 365 days per year, then we open and close our hands just under a thousand times a day. I learned, as a caregiver, that I had to hold things very loosely.
When things broke, or things got lost, I learned not to spend too much time worrying about them. Eventually, they would show up, or I would forget about them. And when I did, God could then fill my hands with His things. My prayers for a long time had been three simple words: “God, help me.” I read an article (I gave up reading books because they were too long and I had too little time) that challenged me to change those three words to three different words: “Make this count.” I began to refer to this as my “openhanded prayer.”
That Mother’s Day morning when I woke to find the garbage disposal filled with nails, screws, and bolts, I prayed, “Make this count.” After turning off the disposal, I stuck my hand in and removed the items a few at a time. If my hand was clenched around too many items, I couldn’t have removed my fist. Truly a lesson in openhanded living.
I watched Bob, as Alzheimer’s stole his mind, loosen his grip on many things, yet he tightened his grip on God. Many times each day, he would say, “God is taking care of me.” Was his response directed at anything in particular? No, just a statement of truth he believed in his heart. A lesson learned as I watched a man walk through a dark valley releasing his grip on things that held no value.
You have just read an excerpt from the book, In the Lingering Light: Courage and Hope for the Alzheimer’s Caregiver by Cynthia Fantasia. Read the first chapter here. Or buy at NavPress.com or your favorite retailer. 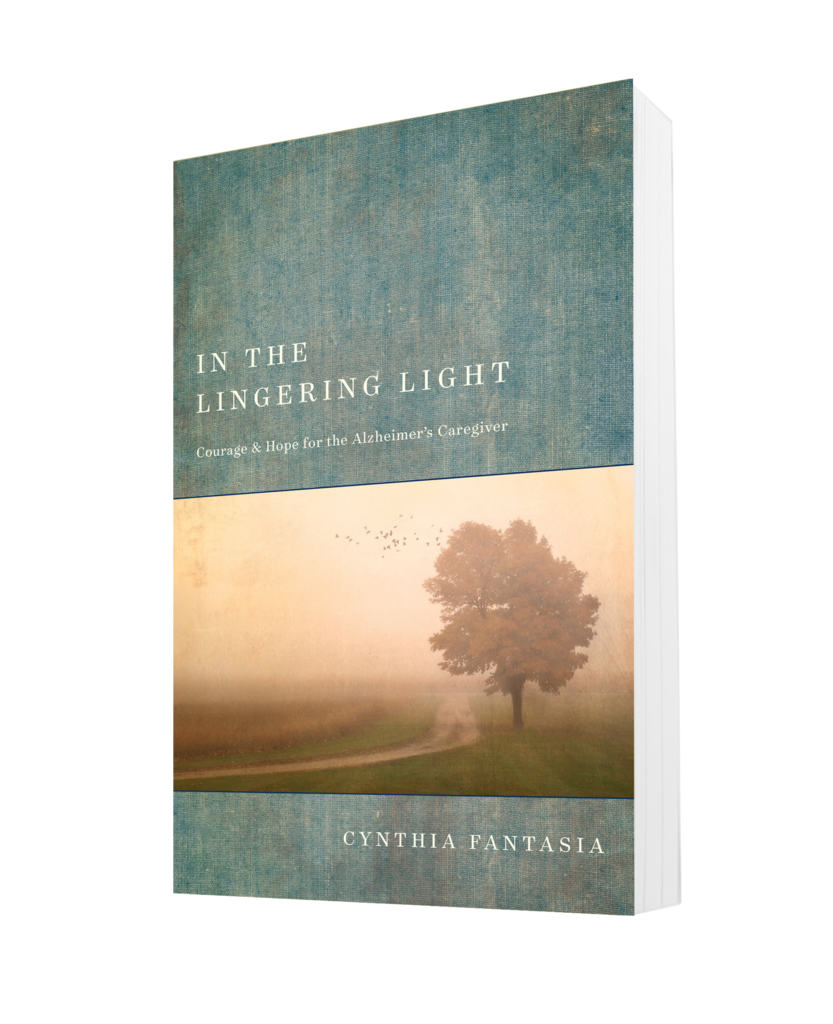