Praying for you need … today.

Few people in modern times have demonstrated the power of petitionary prayer more powerfully and consistently than the nineteenth-century philanthropist and pastor George Müller, who started 117 schools, cared for 10,024 orphans, educated 120,000 children and was accused of “raising the poor above their natural state.”[i]
His legacy is made even more remarkable by the well-documented fact that, instead of appealing for money and making his financial needs publicly known, Müller trusted God to fund this vast operation purely through the power of prayer, raising over $97 million in today’s money in this way.

Thank God before the food arrives.

With so many mouths to feed and no conventional fundraising strategy, George Müller was often forced to take the prayer for daily bread very literally indeed. On one occasion, he stood before three hundred hungry orphans gathered for breakfast, knowing that there was no food in the kitchen, and said grace, thanking God in faith for the food “you are going to give us to eat.” 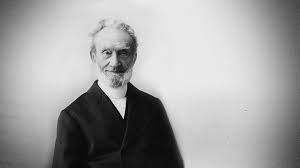 Suddenly, there was a banging at the door and the local baker entered carrying three huge trays of fresh bread, explaining that he’d been up since two o’clock that morning baking for them. The milkman appeared next, announcing that his cart had broken down outside and wondering if they could use his load of fresh milk? Hundreds of children got their daily bread that morning, washed down with creamy milk. It was a breakfast they would surely remember for the rest of their lives whenever they prayed the Lord’s Prayer.[ii]

The notion of “daily bread” harks back to the Old Testament when God fed his people in the wilderness with manna that only remained fresh for a day. There is a strong sense in this phrase, therefore, of asking for today’s needs rather than tomorrow’s wants. It’s not that there’s anything wrong with requesting a nicer car, deliverance from mosquitoes, or three urns of fresh milk. It’s just that we have no right to expect or insist on an unending stream of luxuries. Daily bread means daily bread; Nutella is not guaranteed. God invites us to ask him for the basics but has never promised to make us all millionaires! 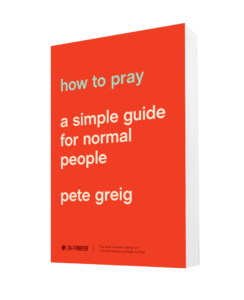 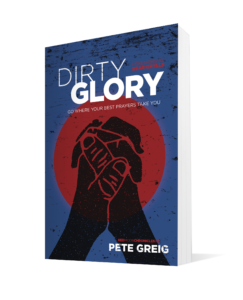 Pete Greig is the bewildered instigator of the 24-7 Prayer movement which has reached half the nations on earth. He hosts the Prayer Course (www.prayercourse.org) and is author of How to Pray, Dirty Glory, and God on Mute.
Taken from How to Pray: A Simple Guide for Normal People by Pete Greig. Copyright © 2019. Used by permission of NavPress. All rights reserved. Represented by Tyndale House Publishers, Inc.
[i] Roger Steer, George Müller: Delighted in God (Wheaton, IL: Harold Shaw, 1981).
[ii] See Steer, George Müller, 161.

3 thoughts on “Give Us Our Daily Bread”