In the middle of a segregated city, our church seemed a model multicultural gathering. Our small group meetings were diverse. Our pastoral staff was diverse. The music performed on Sunday morning had no particular allegiance to a specific genre. It was the utopia that many pastors desire in the contemporary preoccupation with diversity.
However, July 13, 2013, created a pivotal change at my church. That was the day that six Florida jurors acquitted George Zimmerman in the killing of teenager Trayvon Martin. Social media was ablaze with both adulation and condemnation.
July 14 was not a regular Sunday for many. Droves of Americans entered their churches with a heavy burden: the knowledge that they lived in a country which condoned injustice. Many sat in their chairs waiting for the pastor to reconcile their concerns to a good and faithful God. However, many church services went on as though the world outside wasn’t experiencing a traumatic event. There was no mention of the case. There was no attempt to touch the obvious tension.

I have to admit that I was livid. I did not expect my pastors to approach the stage wearing hoodies in veneration of Trayvon. However, I did expect them to pause from their regularly scheduled agenda to address a pronounced tension in our congregation. Many of the minority members of the church felt there was an elephant that needed to be addressed, a national issue that carried heavy implications regarding their identity. Many of the white members wondered why this was such a big deal to people who had no relational connection to Trayvon. The division was obvious—and yet disregarded. For months there was only silent hope that this agitation would go away. It never did.
What did we need in that moment? We needed reconciliation. We needed to talk!
I would reason that my church is a microcosm of America. Brothers and sisters, we need to talk! Furthermore, when we talk we need to not assume the worst in each other but affirm the image of God in one another. This is precisely what Meals from Mars is attempting to do.
Conversations around race can be toxic, difficult, and subversive. However, one of the most destructive ways to enter into a conversation about race is to ignore that we have different opinions and experiences. What I learned about our church community is that we shared in proximity but lacked in authenticity. We sacrificed crucial conversations for the sake of apparent harmony. That is not love, nor does it produce true community.
To live as if we are all the same is to be foolish and irresponsible. We acknowledge variety in the animal kingdom. A zebra is beautiful because of its design. It’s admired because it’s different from the stallion. We appreciate the variations of the seasons in a year. We don’t ignore the snow when it falls. Many in the faith community are well meaning people who desire unity across racial and cultural lines.
Therefore they declare they are “colorblind.” However, the declaration of colorblindness doesn’t remove the tension. It perpetuates a dangerous narrative that how God created me isn’t fascinating enough to acknowledge. The simplest indication of ethnic importance is the fact that God made us this way. All his creation was good!
When we do decide to talk, we cannot sweep the truth of history under the rug of reconciliation. We must deal with the truth in order to get to reconciliation. We must all approach the table with our feelings and agendas submitted to the glorious Lord, speaking candidly from our personal experience.
We must also be allowed to mess up without the threat of being labeled racists or race baiters. We must approach these conversations with reckless compassion—the kind of compassion that may be misunderstood and mistreated, but still extends a hand of grace.
I ask that we stop ignoring our racial differences and love each other in light of our differences. We should desire to know and understand our brothers and sisters so that we can love them and God better. Our color matters because our identities matter. We are creations of the Most High. We are a motley demonstration of his creativity. He desires that we find every aspect of our differences in the intentional design of creation. 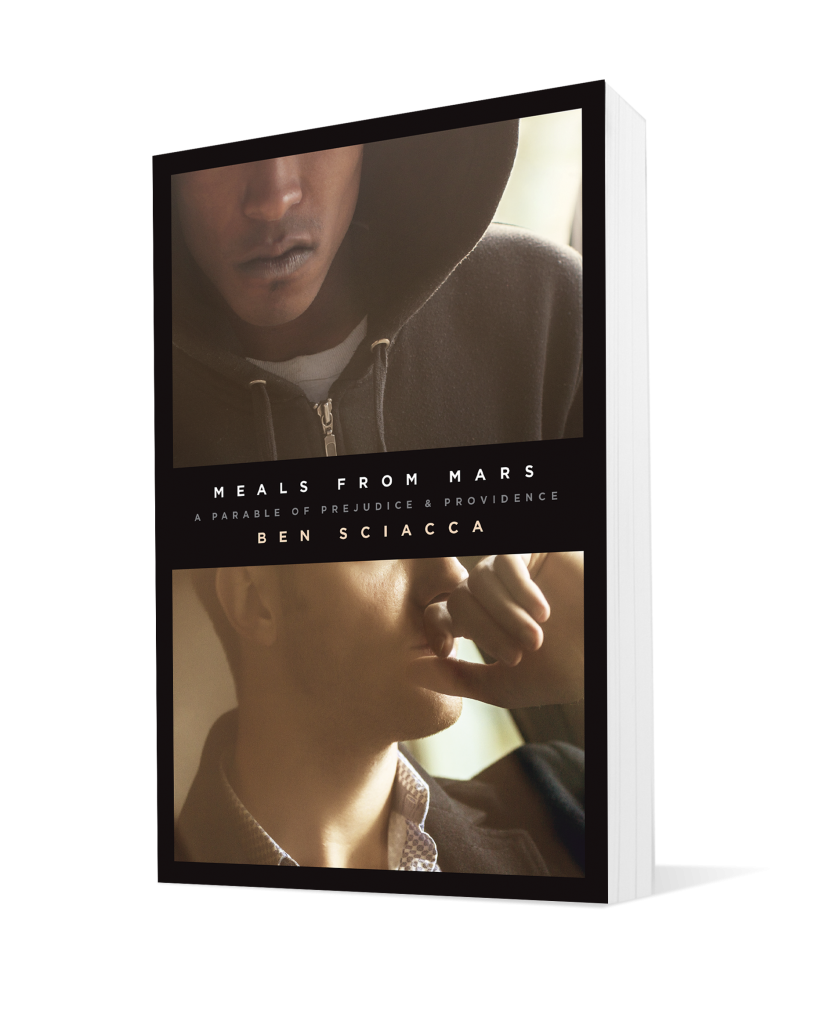 Outside the gospel there is every reason to hoard power and privilege. But in the house of God we are called to consider others before ourselves. Outside the gospel there is legitimacy to feel bitter when offended. But in the house of God it brings dignity to turn the other cheek.
I would commission us all to be slow to speak and quick to listen, to surrender our presuppositions so that true dialogue can take place. We must throw away bitterness and entitlement since we are indebted to the Maker of all creation, and be ready to forgive as Christ forgave us. I believe Meals from Mars can push us in the direction that creates authentic dialogue.
In August of 2014, an unarmed teenager, Michael Brown, was shot and killed by a police officer in Ferguson, Missouri. Once again we had a traumatic event occur in our country. However, there was a different response from my church. Our pastors tackled the issue head on. We had intentional church-led discussions around race and culture. People were able to vent, cry, and argue about the state of America. Once emotions were released, we felt one step closer to real community and reconciliation. I praise God for the courage and wisdom displayed in our leaders. It’s time for that same courage and wisdom to be displayed throughout America.
Now lets talk!!

Latest Articles:
How Do I Know Who to Invest My Disciplemaking Efforts in?
What Are You Afraid Of?
Releasing the Power of Awe In Your Marriage