[maxbutton id=”1″ ]
There is a famous book by a rabbi named Abraham Heschel. The Sabbath is a little book about the mystical power of the Sabbath; it has a hushed tone, as though Abraham was writing about something sacred, unveiling a secret artifact and sharing its dangerous power with the world. When I first read it I didn’t quite get it. It felt odd.

Observe the Sabbath day, to keep it holy. Work six days and do everything you need to do. But the seventh day is a Sabbath to God, your God. Don’t do any work—not you, nor your son, nor your daughter, nor your servant, nor your maid, nor your animals, not even the foreign guest visiting in your town. For in six days God made Heaven, Earth, and sea, and everything in them; he rested on the seventh day. Therefore God blessed the Sabbath day; he set it apart as a holy day. Exodus 20:8-11

The Sabbath defies slavery.
I thought I should look into the practice of the Sabbath a bit more. And I discovered that the Sabbath becomes a big deal at the Exodus. We don’t hear much about it before that besides the fact that God took a Sabbath. After he was done creating the entire cosmos (and maybe others—who knows for sure?), God rested. But besides it being a part of the rhythm of creation, the Sabbath really isn’t a big deal until after the Exodus. Then it becomes a major deal. I mean it’s a really, really, big deal. The Sabbath comes to the forefront of the meaning of being called God’s people. God writes the Sabbath down and calls it holy and tells the people that if they don’t practice the Sabbath then they are not really his people.
Why does it become such a big deal in this story? Why does it take such prominence? What is the big deal?
I’d suggest the Sabbath is a way of defying slavery. Slaves, by definition, cannot stop working. Sabbath is living in such a way that we are no longer slaves.
The Israelites had spent three hundred years or so assimilating into the dominant cultural value system of Egypt. Generations had succumbed to never ceasing from work. It was normal to work all the time. The bustling and ever-increasing economy of Egypt demanded nonstop work. That work was imposed on the Israelites. 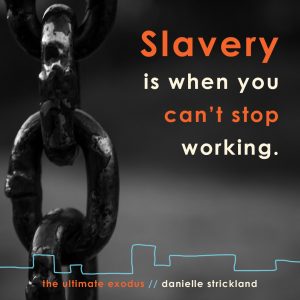 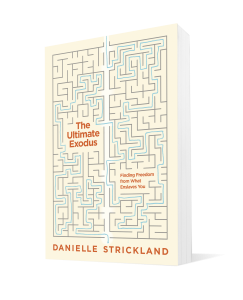 You’ve just read an excerpt of The Ultimate Exodus: Finding Freedom from What Enslaves You by Danielle Strickland. Continue reading chapter 1 here. Danielle serves as an officer in The Salvation Army in Los Angeles. She is a popular speaker, the author of several books and an ambassador for Compassion International and for Stop the Traffik, a global coalition seeking to stop human trafficking. Learn more at DanielleStrickland.com.
Available wherever books are sold. The best deal on buying 10+ copies are at NavPress.com.

[lab_subscriber_download_form download_id=21]
Latest Articles:
Don’t Ever Forget This Truth About the Morning Star
3 Types of Fatigue and How to Fight Against It
It’s Time to Reclaim the Sacredness of Our Work

5 thoughts on “The Sabbath Is a Waste of Time”