The dilemma in the land of unanswered prayer, and one of our chief concerns as followers of Christ: How then shall we walk? How should we carry ourselves in the midst of our trials? Is it okay to walk with a slumped back, or should we straighten up and start to whistle? To say it even more bluntly: Do we have to celebrate what we’re going through in order to embrace it in a healthy, godly way?
For this question, I turn to one of the most painful events in all of Scripture: the destruction of Jerusalem in 586 BC. This would have been a painful event for any people, but for the children of Israel, it was a crushing blow.
They were the chosen people. God had promised them the stars. He would turn them into a great kingdom, and a descendant of David would sit on the throne forever. God had vowed to bless them, to protect them, and to make them a shining example of perfect goodness and enduring strength.
Now, more than a thousand years after that initial promise, the covenant was in ashes. They had broken it again and again and again. For many decades, God tried to warn them of the terrible consequences of their idolatry. He sent prophet after prophet to warn them of their impending doom. They could turn back. There was still time.
Jeremiah’s calls were especially moving. The Babylonians were rising, he said, and unless Judah repented of her idolatry, they would swallow Jerusalem whole. 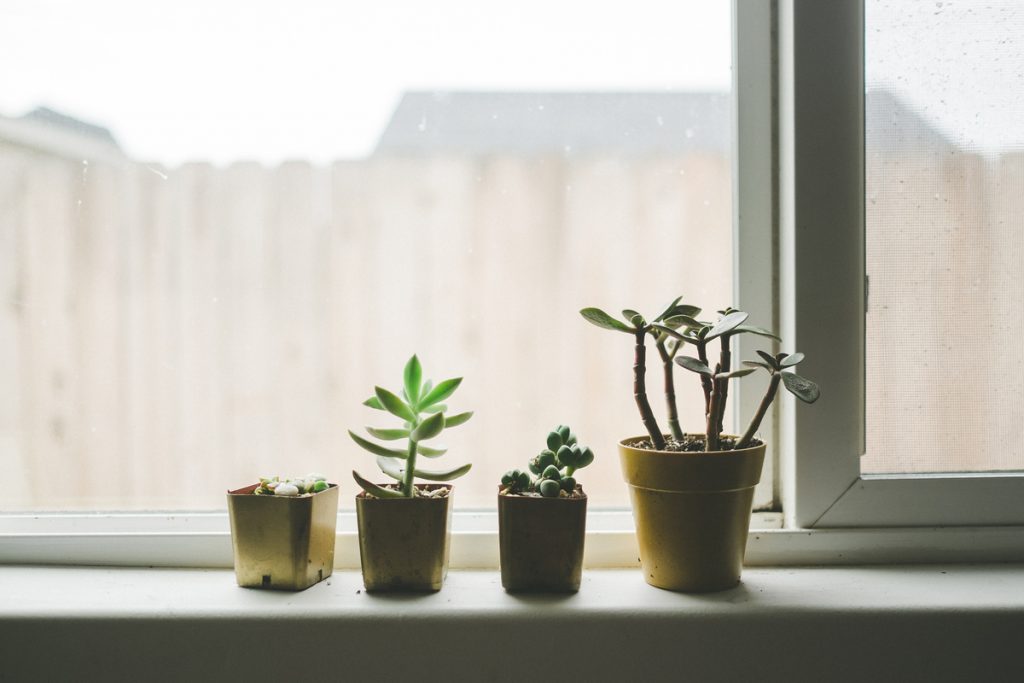 But the people preferred their old propaganda films to such warnings. Destruction could happen to others, but not to them. They were God’s chosen people.
Even when the mighty Nebuchadnezzar at last laid siege to Jerusalem, many still couldn’t believe they would lose the fight. But soon food ran out, the wells went dry, the walls were breached, and the city burned.
Thousands died, either from starvation or the sword. Those who survived watched the soldiers utterly destroy their beloved temple—the symbol of their covenant-keeping God. It was a bitter day.
Their misery didn’t end there, however. Thousands of survivors were forced to leave their decimated homeland. They marched under armed guard for six hundred miles. It would have taken weeks. Months, even. They passed through many regions on that walk. They would have passed through the now-defunct northern kingdom, through the outskirts of Syria, and through the Euphrates river valley. And unless I’m wrong, they also walked through the stages of grief as well: denial, anger, bargaining.
When they finally arrived at the ancient city of Babylon, they were neck deep in sadness. Psalm 137 paints the scene, giving off the unmistakeable scent of depression:

By the waters of Babylon, there we sat down and wept, when we remembered Zion. On the willows there we hung our lyres. For there our captors required of us songs, and our tormentors, mirth, saying, “Sing us one of the songs of Zion!” How shall we sing the Lord’s song in a foreign land? Psalm 137:1-4, esv

Their heritage was gone, and everywhere they looked, the survivors saw reminders of their own humiliation: emblems of great riches, pagan gods, and overwhelming military might.
Apparently, there were other prophets trying to encourage them with foretellings of a quick liberation. God would take vengeance on Babylon, they insisted, and the exiles would be back home in no time. Their defeat was really just a small and temporary setback. Soon a new army would rise up, a new temple would be built, and who knows, there might even be a new shepherd boy waiting to become king!
Those perpetually optimistic voices still reach us in the present. “This thing you’re going through is but a hiccup,” people say. Their hearts are pure. They only want to encourage us. “None of it will last. You’re right about to be done!”
Such guarantees were not helpful in ancient Israel, and they aren’t very helpful now. Optimists, God love them, are no more able to tell the future than pessimists are. Don’t get me wrong: We need hopeful voices in our lives. But some circumstances are past the point of easy fixing. Sometimes a disease is terminal; sometimes a marriage is broken beyond repair; sometimes the exile lasts. In such cases, unbridled optimism has no power to deliver on its promises.

What then? Is the only alternative to give in to permanent despair? Certainly, it can’t all be sorrow. Is there nothing to be thankful for in the present fight? Are there no roses in the midst of all the thorns? Is there no cool breeze on the banks of the Euphrates? Every time we inhale, we breathe in God’s continued blessing. We have life. We have breath. We have our children. He has not forgotten us.
This is the same tug-of-war that rages in the special-needs community. Parents like me can feel so awash in sorrow that they can no longer see the beauty of their children, while advocates on the spectrum are begging the world to look past the pain and see the loveliness autism can offer.
So now, we join the exiles on the banks of the river. We stand between two different visions of life. How shall we live in our land of unanswered prayer? How can we embrace our long exile?
The prophet Jeremiah himself gave the Israelites their answer in a letter he had sent to the first wave of exiles. We’ve all heard the most memorable line of the letter. It goes like this:

“For I know the plans that I have for you,” declares the Lord, “plans for welfare and not for calamity to give you a future and a hope.” Jeremiah 29:11, nasb

How ironic that we have plastered that line on the front of graduation cards and fancy memes about hope, when in fact, it came directly after this sobering sentence:

For thus says the Lord, “When seventy years have been completed for Babylon, I will visit you and fulfill My good word to you, to bring you back to this place.” Jeremiah 29:10, nasb

Put together, those lines promise something along these lines: “God hasn’t forgotten Israel, and he still has plans to bring your people back home—plans that he will accomplish after most of you are long dead.”
You can almost see the slumping shoulders of the exiles as they read. They would not be rescued. In this case, there would be no cure for what ailed them. There would be no escape from Babylon, no matter what the prognosticators claimed.
The rest of the letter gives keen instructions on how to live out the remainder of their lives. Jeremiah’s tone is at once subdued and sanguine:

Thus says the Lord of hosts, the God of Israel, to all the exiles whom I have sent into exile from Jerusalem to Babylon, “Build houses and live in them; and plant gardens and eat their produce. Take wives and become the fathers of sons and daughters, and take wives for your sons and give your daughters to husbands, that they may bear sons and daughters; and multiply there and do not decrease. Seek the welfare of the city where I have sent you into exile, and pray to the Lord on its behalf; for in its welfare you will have welfare.” Jeremiah 29:4-7, nasb

Yes, I know he wrote these words for his lonely countrymen, but they are mine now. They are yours, too. And today, the prophet is urging both of us to make peace with our situations. It is true that we must come to a place of acceptance, but acceptance will probably be bittersweet. Indeed, the bitter flavors might be the most potent. After all, Babylon might be pretty this time of year, but it is not home. It is not Jerusalem. Thankfully, there is no law requiring us to feel affection for a thing before we embrace it.
But please hear me: We need to embrace it.
What does this mean for me? It means I have to make peace with my son’s condition every day. I don’t have to pretend I am enjoying it on days when I am not, but neither can I ignore the beauty and blessings it offers on the other days. I don’t have to commit to any polarizing camp.


If Jack’s regressions continue for the rest of his life, I will have to make the best of it. I will have to open my eyes wide to discover who he is instead of who he is not, and the truest thing about him is that he is precious. Every one of his thirty-seven trillion cells carries the fingerprints of his Creator. Joy sits in his eyes, and it is my job to find that joy and to fan it wherever it flickers; to take his hand whenever he falters; to give him the words he so desperately wants. My job is to find the gold within him, even when he himself doesn’t see it, and help him mine it out.
This is my life in exile, and I realized it sometime in the middle of that season of regressions. I’m not sure when the lesson took, but it took, and I finally waved good-bye to sorrow.
What about for you, friend? I don’t know your trials, but I know this: They might always hurt. The feeling of misplaced pain might never go away. You cannot beat yourself up over that. The trial you’re dealing with might never inspire happiness, but that cannot be your end game. If it is, you are setting yourself up for a lifetime of guilt and self-loathing.
And yet there will be joy in this journey. I promise you, there will be aching joy. It is the greatest of all the treasures of the dark. We’ll find it together.
For now, let’s settle in. God plays the long game. We are playing it now, too. The days of despairing and self-medicating have to end. It’s time to plant a garden.

You’ve been reading with Jason Hague from his book Aching Joy: Following God Through the Land of Unanswered Prayer. Read the intro and chapter one for free here. To read Jason’s blog or watch the videos about his family and their journey with autism go to jasonhague.com. 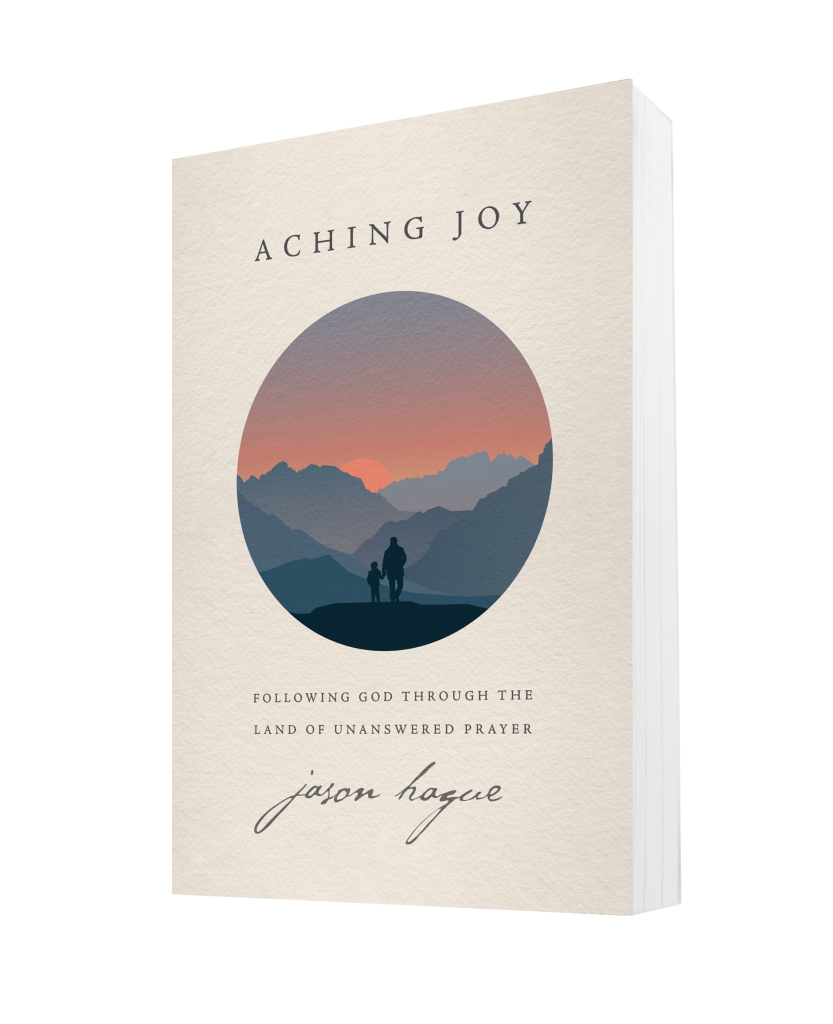 Latest Articles:
The Discipline of Irresponsibility
The False Self and the True Self
Three Priorities for Majority-Culture Christians to Create Beautiful, Multiethnic Ministry