We know that our old sinful selves were crucified with Christ so that sin might lose its power in our lives. We are no longer slaves to sin. For when we died with Christ we were set free from the power of sin.
Romans 6:6-7

When we accept Christ’s sacrifice on the cross, our relationship to sin completely changes. Sin is no longer our master, no longer in control of our lives. We are free to be faithful. But we live in a corrupt world, constantly surrounded by advertised enticements to sin.
It is not easy “to have nothing to do with sin” in today’s culture. But by the grace of God, we can live faithful lives in the midst of the sin around us.

Because A. C. had been set free from the power of sin, he was free to be faithful.

NBA player A. C. Green has lived in such a way. After graduating from high school, he attended a church service where he accepted Christ. He was a star basketball player at Oregon State and became part of a Bible study and grew in his faith. The Los Angeles Lakers drafted him in the first round. In his second game he scored seventeen points and grabbed sixteen rebounds; he was the first Laker rookie in more than two decades to play in every game. Even though surrounded by the pressures of a life in professional sports, A. C. remained firm in his faith. He vowed to remain pure before marriage, and other players teased and tempted him because of that commitment. But despite his young age, he did not allow his teammates to influence his lifestyle. He was faithful to his word, and he married at age thirty-eight.[i]

Christ’s sacrifice on our behalf sets us free from sin in two ways: substitution and identification. Warren Wiersbe composed a chart clarifying these two powerful truths:

Wiersbe further explained, “Sin is a terrible master, and it finds a willing servant in the human body. The body is not sinful; the body is neutral. It can be controlled either by sin or by God. But man’s fallen nature, which is not changed at conversion, gives sin a beachhead from which it can attack and then control … God does not command us to become dead to sin. He tells us that we are dead to sin and alive unto God, and then commands us to act on it.”[iii]
Understanding our freedom from sin is crucial to knowing that we are not bound by sin. We can no longer say, “The devil made me do it.” The penalty for our sin has been paid and the power of sin is broken, but acting on this truth takes effort—it takes making intentional choices.

Learning to Control My Tongue

One struggle I have is allowing sin to control my tongue. A verse that dwells deeply in my heart is, “Let no unwholesome word proceed from your mouth, but only such a word as is good for edification according to the need of the moment, so that it will give grace to those who hear” (Ephesians 4:29, nasb). I want my speech to be kind and gracious, but often I end up speaking too quickly and carelessly. Embracing the facts that sin has lost its power in my life and that I have the indwelling Holy Spirit to keep me from yielding to sin is monumental. Because I’m still in the process of learning to control my tongue, I’m thankful for God’s grace, which includes repentance and restoration. Most importantly, though, I am thankful that God’s grace includes freedom from sin’s control.
Matthew Henry, a Puritan minister and expositor, spoke beautifully of God’s “golden sceptre of grace.” God does not make us obey him. He lives in us and leads us, but we must be willing subjects to his rule. Because of the cross, we now have a choice to live faithfully. As Henry said, how can we sin against so much goodness, and abuse such love?

Living in the freedom of God’s grace doesn’t mean that we are free to do what we please. Rather, it means we are free to do what pleases the Lord. Countless people are under the impression that they are free because they can choose to enjoy and participate in whatever the world has to offer. But as Paul David Tripp reminds us, “Real freedom is only ever found when God’s grace liberates you to live for One infinitely greater than you.”[iv]

Prayer for Freedom Over Sin

Father, how very grateful I am that you have freed me from the power of sin. I humbly admit my need of your grace, and I humbly submit to your rule. Thank you for your goodness and love, and thank you for the privilege of living faithfully for you. Amen.
Let us, then, renounce the reign of sin, and accept the reign of grace. 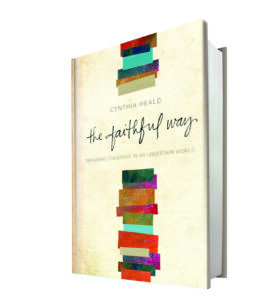 This post is an excerpt from the book, The Faithful Way: Remaining Faithful in an Uncertain World by treasured Bible study teacher Cynthia Heald. In this 31-day devotional, Cynthia encourages you to live an intentionally faithful life that brings honor to Christ and enables you to say, “I have remained faithful.” Read another excerpt here.

Latest Articles:
Caregiver, What Do You Need to Cross Off Your List?
Are You Up to the Call of Caregiving?
Iron Sharpens Iron Man