Building Bridges to the LGBT Community

Building Bridges to the LGBT Community

A few years back I was asked to assist an urban church working through some “issues” surrounding their new community center and daycare. In the largest urban centers of the United States—cities like New York, San Francisco, and Chicago—the cost of daycare is legalized robbery. Unless a family has generational wealth, both parents have to work to provide for their family. This leaves a significant gap in their children’s care. I have a few friends who are raising children in these cities, and they don’t even bat an eye at dropping upwards of $60,000 per year on daycare.

In light of this problem, the church in question opened a free daycare in their newly constructed community center, offering its services to any family in the community who needed it. The church’s only two stipulations were that the child had to come with enough food for the day, and the parent(s) had to volunteer regularly at the daycare so the church could continue not charging a fee.

The church was based a few miles from one of the largest LGBT communities in the country. When word got out about free daycare, LGBT parents started dropping their kids off at the church’s community center in large numbers. The LGBT parents brought enough food for their children for the day and eagerly asked, “Where do I sign up to volunteer?”

What message would it send if LGBT people volunteered at their church-sponsored day care?

This evangelical church started to panic. They weren’t worried that LGBT parents would harm the children; their concern was what message they would be sending if they allowed  LGBT people to volunteer at their church-sponsored initiative. What if, the underlying concern was, some of the kids start asking questions about two moms and two dads? How could the church maintain theological congruency in their control of the daycare?

My response was threefold. First, having (not “allowing”) LGBT parents volunteer conveys a message of love by the church to all people—all the moreso, given their surrounding area’s awareness of the church’s theologically conservative sexual ethics.

Second, while the church was certainly free to limit use of its community center and daycare to its congregation, it was unrealistic to advertise its services throughout the community and expect that only heterosexual parents would bring their children.

Third, calling their facility a community center while prohibiting such a prominent population in their community from using it was inconsistent with why it was created in the first place.

Something happened to the skeptics on both sides.

Eventually the church decided to open their community center and daycare to their whole community, including LGBT parents. What ended up happening from this decision took the church and the local LGBT community down an unexpected route.

Both parties had come with a healthy dose of skepticism for how each might be viewed and treated by the other. But the one thing both communities agreed upon was that the kids were to be prioritized, loved, and cared for. As most of the LGBT parents, who had no previous connection to this church or any religious affiliation in general, started to get to know the church’s leadership through the daycare, and vice versa, the skepticism and worst-case scenarios in their heads started washing away.

As the months progressed one set of the parents, then four, then six, began attending this theologically conservative evangelical church every Sunday with their children. The pastor reached out to each of the couples individually, and one of the first things he asked was why they attended the church knowing “the church’s stance on homosexuality.”

The couples responded to him with different versions of the same conclusion: “We never expected this church to conduct our marriage ceremonies. We just hoped you would accept and love our kids like any kid. You’ve done that. On top of that, this daycare has changed our family’s financial situation. We no longer have to shell out tens of thousands of dollars every year on daycare, and for the first time we have disposable income. You’ve done more for the security of our family than anything we’ve encountered, Christian or not. If that’s the case, we thought we’d give the church a try.”

I could not tell you if one or any of those couples or their kids now consider themselves Christians or if their beliefs have come to match the beliefs of the church. But how fascinating is it that LGBT parents would credit this theologically conservative evangelical church with doing more for the security of their family than anything else? I’m continually amazed how an act of meeting needs through service—both the church’s offer of free day care and the LGBT parents’ commitment to volunteer—not only changes people’s lives but restores decades’ worth of broken trust. The church chose to love its LGBT neighbors as itself without having to agree on a definition of sin in sexual ethics. And the neighborhood was changed as a result.

This article was taken from chapter 2 of Us versus Us by Andrew Marin. 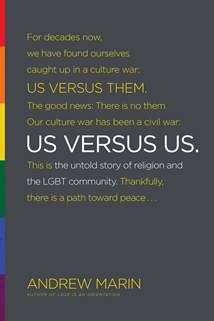 Us versus Us
by Andrew Marin
$14.99
Softcover
E-book
Checkout
Details