God’s Intention Is to Get to Everyone

God’s Intention Is to Get to Everyone

The Christian gospel is expansive by nature—it spreads out. It’s what you would expect: The God who created a vast universe acts in such a way that his redemptive help will reach into every nook and cranny of creation. A God who can create with such endless variety and intricacy is going to redeem in the same way.

But it’s not always what we expect. Before the gospel is universal, it’s local. Before it reaches into the whole world, it reaches into one life. Before it transforms a civilization, it changes one person. Because of this sequence, it’s always possible to stop with the local, the individual, and never move on, as God moves on, to the worldwide.

One of the key tasks of Christian growth is to make this transition. To move from what is private to what is public—to develop from a creature whose needs are satisfied by Christ to a citizen who shares the fruits of redemption with the entire community of humankind.

The ancient promise that came to Abraham and started the whole history of redemption was that God would bless him and through him bless the entire world (Genesis 12:2-3). Blessing the entire world is pretty inclusive. The promise is not a Hebrew promise, a Jewish promise, or a Palestinian promise—it’s a universal promise. God’s intention is to get to everyone.

Cornelius was a Roman, a soldier. He was the representative of the pagan, Gentile world. He sent for Peter to lead him further into the obedience and worship of God. Cornelius was a religious man; Peter was the leader of the new Christian church. Cornelius was curious and hungry for a fuller, more complete spiritual life. Peter was prepared by God for the mission through a vision. The vision consisted of a great sheet descending from heaven, full of all kinds of animals. A voice said, “Go to it, Peter—kill and eat” (Acts 10:13). But Peter refused—he was a kosher Jew, and much of what was in the sheet was ritually unclean. God’s answer was, “If [I say] it’s okay, it’s okay” (verse 15). Peter eventually understood the vision to symbolize all the people of the world—they were all creatures of God, and he was to have the deepest kind of spiritual fellowship with them, the kind demonstrated by eating at the same table with them.

At Cornelius’s invitation, Peter went to his house and shared the Christian gospel with him and his family and friends. As a result, everyone in Cornelius’s home became a Christian. What happened between Peter and Cornelius became the key event in breaking the church out of its Jewish, Palestinian confines. Suddenly there were no limits to whom the message would be relevant. As Peter said in his sermon, “God plays no favorites! It makes no difference who you are or where you’re from—if you want God and are ready to do as he says, the door is open” (verses 34-35).

The complete Christian needs two conversions; Peter is the model of both. His first conversion was to Jesus as his personal Savior. You know the great story—how after years of association with Jesus, the breakthrough to recognition and commitment came on the road to Caesarea Philippi (Matthew 16:13-20). Peter realized that in Jesus, God was loving and saving him; and he said, “Yes, I want to be loved and saved that way.” It was a conversion to a personal relationship and a life of discipleship. The second conversion came at Joppa in the home of Cornelius the centurion. Here Peter recognized that God was concerned not only about him and that small group of disciples but also about every person in every nation—God had a plan for the world, and his salvation was as extensive as creation.

How large is your heart? Large enough for Jerusalem, Judea, Samaria, and the ends of the world? Large enough for the people there? And the cares of those people? Or is it confined to the smaller world of your own neighborhood, your own school, your own job, your own family? How do you think Christ feels about a heart like that?

Take it out of the parochial neighborhood that is my life

and bring it to other neighborhoods, other cities, other countries.

Take it there, Lord, and break it there.

And in the breaking, enlarge it.

Especially I pray for . . . [a foreign country God has put on your heart].

“God’s Intention Is to Get to Everyone” is a contemplative reading on Acts 10 found in The Message Devotional Bible. This excerpt is one of the 52 contemplative readings found in this special edition. It also contains more than 600 insights and 400 reflective questions set alongside the Scripture that inspired them. 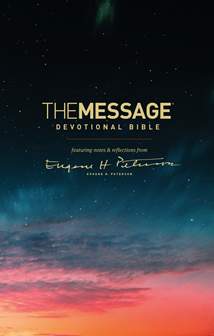 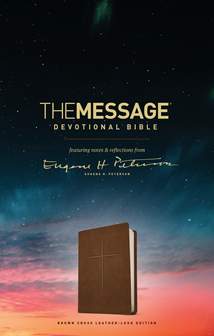