Known by God: You Are a Name Giver

Known by God: You Are a Name Giver

What does it mean to be a royal priest?

We get a glimpse of the answer in a short story in Scripture about a mysterious (but central) figure, the kingly priest Melchizedek. His name means “king of righteousness,” and he ruled over a city named Salem, or “shalom.”

Melchizedek appears on the biblical scene just after Abraham defeated some enemies in Sodom. Abraham gathered with a few other kings to bring a sort of ceremonial conclusion to the conflict. At this gathering, the royal priest Melchizedek appears almost inexplicably, acting as a divine mediator.

In just three verses, we find all we need to know about him: “Melchizedek king of Salem brought out bread and wine. He was priest of God Most High, and he blessed Abram, saying, ‘Blessed be Abram by God Most High, Creator of heaven and earth. And praise be to God Most High, who delivered your enemies into your hand’” (Genesis 14:18-20).

As a royal priest, Melchizedek does three profound things:

1. He sets out a table of bread and wine (among enemies).

Later in Scripture, we are told that Jesus is a priest forever in the order of Melchizedek (Psalm 110; Hebrews 7). In other words, Jesus came as the Almighty King of Shalom, the Great High Priest, and the Blessed Namer. And now as God’s royal priesthood, you and I are invited to follow in Melchizedek’s footsteps and Jesus’ own footsteps.

We are tasked with mediating God’s  presence—through blessing others by naming them well.

Each of us, as royal priests, have opportunities in our days and relationships to speak blessed names over the people around us. Here are three examples to spark your imagination:

One thing I love about CrossFit (from my limited knowledge of CrossFit culture) is that everyone there is called “athlete.” Even if you’re new to CrossFit, even if you’ve never done a pull-up or a tire flip in your ever-   loving life, everyone at CrossFit calls you “athlete.” Why? Simply because you have been brave enough to show up and do the work. Though you may not feel like, see yourself as, or name yourself “athlete” now, you are on your way to becoming one.3

We can name others by their eschatological (fullness of time) identity, based on who they are becoming. Calling others by their becoming names is speaking out the truth of who Jesus says they are now and will be one day.

A friend of my husband, Kevin’s was wrestling with a new name: “Asperger’s.” He was recently diagnosed and confided in us, “I hate the word so much. It doesn’t necessarily hold me back, but I feel like less of a person now.”

Kevin asked him if he’d ever spent time talking to God about it. He hadn’t but was willing to let Kevin pray for him. When Kevin prayed, he asked, “God, what gifts are hidden here in Asperger’s that my friend can’t see yet? God, he is reacting so strongly to this name; what do you want to show him in it?”

As they prayed, the Holy Spirit showed them the root of his struggle. “Asperger’s” wasn’t necessarily the source of his grief; it was the false name underneath: Mistake. Through tears, he confided in Kevin, “Since I was diagnosed, I’ve been believing a  lie— that I am a mistake.”

That day, Kevin asked God to remind his friend of his true name and to eradicate the name “Mistake” from his soul. When they reconnected a few months later, he told Kevin that he was learning to understand Asperger’s and appreciate its gifts. “I am learning to embrace myself as I am. More than that, I realize I am not ‘Mistake.’ That false name is gone. God is helping me embrace a new identity.”

We can help others understand the places where they are believing false identities and discover instead God’s beautifully reimagined name for them.

Every time we met for a girl’s night out, I kept “seeing” the name Healer on my friend’s forehead. One day, I finally worked up the courage to tell her, “I know this may sound weird, but I see ‘Healer’ on your forehead every time we’re together.”

Tears immediately pooled in her eyes as she told me that she had felt burdened to start an organization for women who’ve been abused or abandoned, but she hadn’t acted on  it—out of insecurity. That “name” gave her the affirmation she needed, and she’s been running a thriving nonprofit, ministering to hundreds of women, ever since. She recently shared with me that she refers back to this moment whenever the enemy tries to tell her she’s not qualified to lead and execute the vision God has given her: “I remind myself of this conversation often, and it helps me push past the lies.”4

Sometimes God gives us a glimpse of a truth about someone that answers something they’ve been asking him. We can participate in God’s  prophetic-naming ministry by offering  what he’s placed on our hearts about them. We have no idea the eternal impact this will have in their lives and in the lives of others through them.

As God’s royal priest, you are meant to, very intentionally, share the love and presence of Jesus with every person you come into contact  with—be it a friend, stranger, or  enemy—by naming them well.

In a world hell-bent on stripping us of our identity, in a culture  that so often pressures us into the trap of comparison, in a sphere that regularly dehumanizes other image bearers—in a society that  tears others down all the  time— the act of seeing someone, truly seeing them, welcoming them, and blessing them with a dignifying name, is one powerful way of putting on your royal, priestly robes and getting to work.

The world needs more of what’s good and true in us. It needs to be reminded that we’re miracles.”

As God’s royal priest, you are invited to follow in Melchizedek’s footsteps and Jesus’ own footsteps. You are tasked with mediating God’s presence—through blessing others by naming them well.

So name your neighbors, strangers, and enemies with honor. This is your sacred responsibility. Speak dignifying goodness over them and about them. Refuse to tear them down with your words. Set tables before them with a feast of encouragement. This is the way of Jesus, our Great High Priest and Royal Namer.

This download can serve as a reminder, praise, and prayer prompt as you lean into the truth of who you are in Christ. 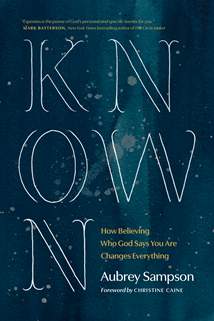 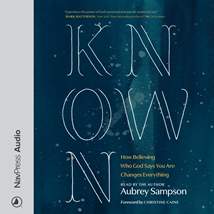