How Cornbread May Be the Bread of Life in Your Neighborhood

How Cornbread May Be the Bread of Life in Your Neighborhood

Neighboring is a lost art, but people have not lost a heart for it. Not by a long shot. That was the case for Lance and Sherri Ford. They wanted to reach out to their neighbors, and not just once or twice a year, but regularly. They decided to extend invitations to their neighbors for “cornbread gatherings”. The Cornbreadians, as they call themselves, have been meeting for several years at the behest of a couple who simply wanted to get to know their neighbors and decided to do something about it.

According to these founders, there are six simple “rules”:

The Fords are on a social media site to communicate with their local neighborhood, and Lance inquired to see if any of their neighbors would be interested. Within minutes the responses started rolling in, and continued for the next several days:

“Oh this is wonderful. Yes, please include us.”

“I love it! Let me know when this starts.”

“We would absolutely be interested! What a terrific idea! Please keep us posted with details.”

“Yes! I would be very interested. We all should know each other better!”

“An excellent concept! My wife and I would love to be a part of it!”

“What a fantastic idea! It builds many good things, not the least of which is a sense of community and neighborliness. So very cool.”

Within a couple of weeks Lance and Sherri hosted their inaugural Cornbread Supper. That was almost two years ago. If the Fords stopped now there would be a major revolt. Most of those who participate host the Cornbread Supper from time to time, and all kinds of themes have been done: Italian food night, Mexican food night, Asian food night, and a progressive dessert night. New friendships have developed all across their neighborhood that had not happened in the previous five years of living there. The Fords say that this has been the easiest and most transforming habit for creating a close-knit neighborhood. The Fords have shared their story with several others who have started their own neighborhood Cornbread Suppers, and have experienced similar transformation.

So, start dreaming! What are the possibilities around your table or outdoor grill?

Come up with a theme (Italian, Asian, homestyle American), and have neighbors host a course of the meal at their place. Everyone moves from home to home, or apartment to apartment, and eats the course prepared by that host.

Each person brings a prepared dish plus copies of the recipe to share. Themes can be around holidays, a particular required ingredient, or something that includes the telling of the story behind the dish (“My grandma fixed this every Sunday”).

Hold a wine-tasting evening. Everyone brings a favorite bottle of wine. Or invite a local sommelier to present some wines.

~Dive deeper into ways to bring God’s kingdom to your neighborhood. An inspiring read for you is Next Door As It Is in Heaven: Living Out God’s Kingdom In Your Neighborhood by Lance Ford and Brad Brisco.

This article was originally posted on The Disciple-Maker Blog. 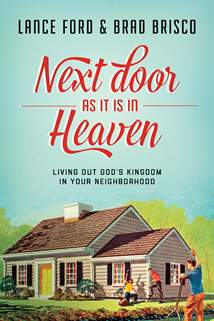 Next Door as It Is in Heaven
by Lance Ford
$14.99
Softcover
E-book
Checkout
Details

Next Door as It Is in Heaven
by Lance Ford
$14.99
Price May Vary by Retailer
E-book
Softcover
Details